I’ve been following author Jess Hernandez on Twitter for a while and was so excited to see her debut picture book, First Day of Unicorn School (available for pre-order now!), is out on NetGalley. Sooo I logged in for the first time in two years (yikes), requested the book, and was thrilled to be approved within the hour. I sat down to read it with my four-year-old this afternoon and I was NOT disappointed.

First of all, look at that gorgeous cover! The whole book is full of bright, fun illustrations just like the cover art. My daughter loved them, and we spent a while just looking at the pictures and talking about the animals.

So, does the content live up to the expectation set by the cover? Yes! Milly is a donkey with a party hat (NOT a Unicorn), but gets accepted to Unicorn School anyway. She’s so nervous on her first day that her classmates are going to discover she’s not actually a unicorn and she won’t fit in, but it turns out her classmates all have a secret of their own . . . My four-year-old caught on quickly to what was happening (“Mom, she’s not a unicorn!”), and had a great time pointing out all the different “unicorn horns” throughout the book.

Ultimately, it’s a feel-good picture book showing kids that everyone has something they’re worried about, something they fear will keep them from fitting in — which actually means we’re all more similar than we thought, and really have nothing to fear. It’s about accepting ourselves and each other, and gets that message across in a totally kid-friendly, non-preachy way. I think it’s fabulous!

The book is actually geared for kids in grades K-2, so I’m looking forward to reading it to my first grader, too, and seeing how well she picks up the message. I give this one five stars, and recommend it to everyone with little kids at home.

Thanks to the author and NetGalley for the advanced reader copy! 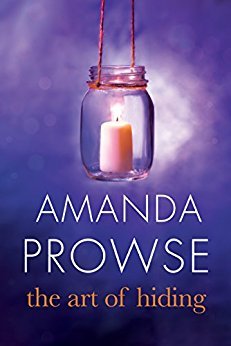 I recently read another book I picked up via NetGalley last year/earlier this year, called The Art of Hiding by Amanda Prowse. When I opened it up I had no recollection of what it was about, or even whether it was fiction or nonfiction. Turns out it’s a novel, and a fairly heavy one at that. I briefly considered putting it down, because I sometimes struggle to read emotionally taxing stories, being prone to depression and anxiety, but I quickly found myself too engrossed in the story.

The protagonist, Nina McCarrick, is left to raise her two sons when her husband unexpectedly dies in a car wreck. Having married young and into wealth, Nina has never had to fend for herself as a mother and adult. The novel is Nina’s story at its heart: her journey to self-awareness, self-sufficiency, and self-respect, as a woman and as a mother. Though I started out identifying with Nina, as the story went on I sometimes found her incredibly frustrating — I found myself judging her and asking how on earth she let herself get into such a ridiculous situation! That said, I came to admire her perseverance and her ability to both provide for her sons AND pay attention to her own needs.

It’s an emotional story of loss, so the reader must be prepared for some weightiness. But it’s also a story of love and triumph, with many important life lessons taught (in a very unpreachy fashion) along the way. I’ve included below some of my favorite quotes from the book, those that resonate most with me (for varying reasons) and that I think show some of the depth of the story and insightful life lessons learned by the characters throughout the book:

“But here’s the thing, Nina. I think happiness lies in being content now – right now! Every day! That’s not to say you can’t plan and work for change, but if you are constantly waiting for happiness to start, waiting for the change that will make it happen, then you just might miss some really good days along the way.” (Kindle location 3253)

“Hardship eroded his sense of entitlement and in its place a nicer, humbler boy was emerging.” (Kindle location 3953)

“I’ve been reading a lot about people who are depressed. People who live with extreme stress and those who only see one way out… They often fall into two camps. Those who fall apart externally, seek help, battle it publicly, and then there are those won don’t, can’t. It’s this group of people who interest me most. They are skilled in the art of hiding. I think that my dad must have been like that.” (Kindle location 4105)

I’m sorry it took me so long to read this book and I definitely think it’s well worth reading (just not if you’re feeling in a fragile frame of mind). I’ll definitely be interested in reading more from Amanda Prowse! 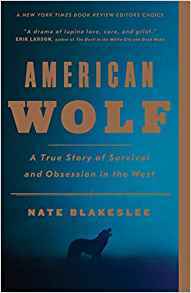 American Wolf by Nate Blakeslee is the most recent read in my effort to get through all the books I irresponsibly got via NetGalley last year and never read. Essentially, it’s the story of the wolf in America, focusing on “recent” events since the reintroduction of wolves to Yellowstone National Park in 1995. The book follows the lives of the wolves, as chronicled by a handful of avid (or obsessed?) wolf-watchers in the park over many years, as well as the political, cultural, and societal factors that impact wolves’ survival in the American West.

The most gripping parts of the book are Blakeslee’s reporting on the life of O-Six, a female wolf born in 2006 in the park. He succeeds in telling a gripping story of life and survival for wolves as they face both natural and man-made threats. It reads almost like a novel, and definitely paints a vivid picture of wolf society. I learned so much about wolves, the evolution of individual wolf packs, and the social interactions of what are clearly very intelligent and emotional animals.

Woven into the story is the political, societal, and legal context in which the wolf reintroduction and population management unfolded. It was interesting to read about the events through the 2000s and to understand how events I lived through (sequestration and the 2011 threat of a government shutdown, followed by an actual shutdown in 2013) impacted things across the country. It’s disturbing and yet unsurprising, especially having lived my entire adult life in the DC area, to read of the political nonsense–riders circumventing legal protections for wolves tacked on last minute to a must-pass spending bill in 2011, for example.

I couldn’t help but root for the wolves as I read the book, while I understand the legitimate concerns of residents of areas surrounding Yellowstone as they coped with rising wolf populations. I’m glad I read the book, and sorry it took me so long to actually pick it up to read. I give the book 4 stars, only subtracting one because I feel it starts out a little slowly and took some effort to get into. Persevere, though! It’s worth it!