Earlier this year I picked up The Wonderful Story of Henry Sugar and Six More by Roald Dahl to read with my daughter (who is now 8), having been under the mistaken impression that it is a children’s book. Eek – it is NOT. It’s a good book, and I’m glad I read it, but I’m equally glad that she lost interest after a couple of stories. 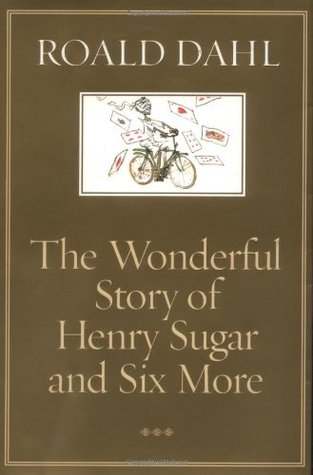 The book is an interesting mix of stories, including several fictional stories as well as an autobiographical story and one true narrative. Overall, though, my feeling about the book is that it’s pretty dark. One story in particular follows young boys as they strap another child to a train track and watch as the train passes over him (!) – this story prompted my daughter to ask, “Mom, why would someone write that story?” My response was something along the lines of how there are bad people in the world, like those mean characters, and sometimes writers will write those stories to help them understand the bad things in the world. I told her that all stories present some truth from the world and have something to teach us, but that we don’t have to read those stories if we don’t like them. That was the last story we read together in the book, but I went on to finish it myself.

I give the book three stars, because it was well-written, engaging, and interesting…but not amazing and slightly disturbing. The autobiographical story is illuminating as to the author’s life though repetitive if you’ve read part of his autobiography (as I have). I do think it should be clearly advertised as NOT A CHILDREN’S BOOK, though!