So, my first grown-up book of 2019 was Nomad of the Emirates by E.B. Dawson (I mentioned this in a previous post). 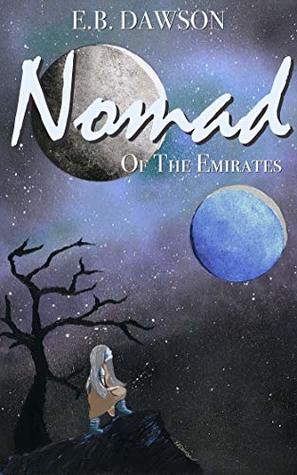 This book was fantastic, and reminiscent of Ursula Le Guin’s The Left Hand of Darkness, which I read last year at the recommendation of author Thomas Fenske. As in The Left Hand of Darkness, Nomad of the Emirates features a lone human emissary to an alien planet and follows the human’s interactions with and efforts to survive in the entirely foreign environment. Nomad of the Emirates tackles issues of race, culture, and class with a depth and emotionality that is impressive in such a short story, and these are the issues, I think, that will resonate with a wide audience. Jessica, the protagonist of the story, I believe, will also strike a chord with many people. What really blows me away is the Dawson’s worldbuilding. I feel like I understand the fictional world of Dawson’s The Emirates as well as, if not better than, Le Guin’s Winter, which is an impressive feat for such a short work. (There’s your bonus book review!)

Now, about that comfort zone…

One author who asked me for a review described my reading style as “hard to pin down,” which I think is a pretty apt description; I read a lot, from all different genres. That being said, short stories and science fiction are things I’ve only recently begun to seek out. I started picking up short stories in 2017, and continued to do so in 2018. It’s a form of writing that I just didn’t even really think about. I’ve read quite a few now, though, including some collections, and I find the format intriguing, if a little broad. Let’s look at a dictionary definition of “short story”:

“Shorter than a novel.” That explains how some I’ve read are two pages long, and some are much, much longer. I do find it interesting, though, to think about the intention as described in the definition. It’s something I’d like to reflect more upon as I read more short stories…

My adventures into science fiction sort of happened by chance, and while I’ve enjoyed the works I’ve read I’m not sure it’s a genre I’ll seek out for its own sake. My big sci-fi read of 2018 was The Left Hand of Darkness, which is described on Goodreads as “a groundbreaking work of science fiction.” I picked this up after the death of Ursula Le Guin in 2018, of whom I had sadly just become aware; Nomad of the Emirates is my most recent sci fi read, and I think the last time I read sci-fi was when I read Ender’s Game over a decade ago. Left Hand and Nomad were both good books, but each makes me want to read more from the author rather than more of the genre per se. I’m open to persuasion, though, if you all have any suggestions!

I think by last count I have over 60 unread books on my Kindle (yikes!), but I’m always open to recommendations. What short stories do you love? What books made you fall in love with science fiction? Share in the comments!