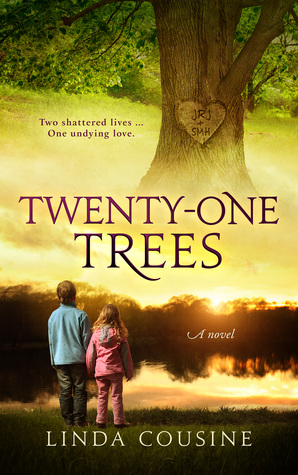 I honestly can’t remember how I acquired Twenty-One Trees by Linda Cousine, but I do remember devouring it pretty quickly! I think it was another I “bought for free” on Amazon after seeing it advertised on Twitter. I have a book-hoarding problem, and I know it. At least e-books don’t take up space in my house…the books are getting displaced by children!

In any case, it’s a story of a husband and wife, Birdy (James) and Savannah Johnson and the path their lives and the lives of their four children take after Savannah ends up with dissociative amnesia; her memory of the past seven years–their entire marriage–is completely gone, and the last she remembers is being a rich beauty-pageant star engaged to her high-school boyfriend. She has no recollection of marrying Birdy, of having had their four children, or that they were quite poor.

I have to be honest and say that I didn’t particularly care for Savannah. I found her spoiled and selfish and sometimes just downright mean. As the story unfolds, however, I gained a respect for her efforts to embrace motherhood and a greater empathy as more is revealed about her past; I certainly can understand her battles with post-partum depression. Birdy is an admirable character and so often I thought that Savannah didn’t deserve his love and devotion.

It becomes clear, however, that they are both broken people (who isn’t, really?), doing their best to live life while accounting for the burdens of their pasts. Ultimately the book is a story of love and life; of how adulthood brings unforeseen challenges in life; of how important personal growth and emotional well-being are for the health and strength of a marital relationship. It’s not a “light” romance by any means, but I would definitely call it a realistic love story.

The story is well-crafted and I was very invested in the outcome, despite my dislike for Savannah. Overall, I’d say I liked it, not loved it, but it’s worth a read if you’re up for something that’s often emotionally heavy but speaks to the power of enduring love. I’d also be up for reading another of Linda’s books in the future!