Does that not sound ridiculous from a book blogger? It does explain my absence, however – it’s tough to blog about books when you’re not reading books… In all fairness, I have been reading a LOT with my kids, but not a lot for me. I suppose I could blog about the kids’ books (as I have in the past), but instead I’ve used that precious free time to try to actually read for myself. It barely worked – until we moved the baby (henceforth known as “A” – she is 7 months old and spectacular!) out of our room. Now I’m reinstating my read-in-bed time right before I go to sleep. I sooooo missed it!

So, on to the book! I received it as a gift for Christmas, and it took me from Christmas until Easter to read: 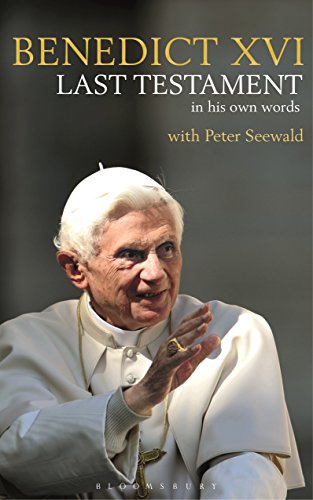 I was initially surprised to find that the book is essentially a transcript of interviews Peter Seewald did with Pope Emeritus Benedict XVI, but I quickly came to enjoy the format. As the title states, the book truly is “in his own words,” and that is my favorite thing about the book. I’ve read some of Benedict XVI’s writing in the past, both for personal reading and for research purposes during my stint in grad school, but I had not known much about him as a person. Reading this book allowed me to see the Pope Emeritus in much more human, personal light, as opposed to as…you know…Pope.

My least favorite thing about the book is how it makes so many references to previous interviews between the Pope Emeritus and journalist Peter Seewald. Along those lines, I would have understood a lot more of the book had I been more familiar with Pope Benedict’s life. There are a lot of references that I just didn’t understand.

Overall, I’m really glad I read the book. I learned a lot about Pope Benedict XVI that I didn’t know before, and I have a greater understanding of how and why he decided to take the unprecedented step of resigning from the Papacy.

As a standalone book I’d give it a pretty low rating of a 2 out of 5 stars, but as a Catholic seeking to learn and understand more about my Church and its leaders, it gets a solid 5.